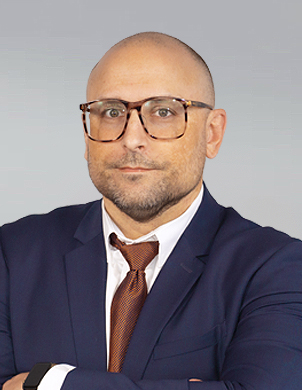 Mr. Bruner has been named to the prestigious Super Lawyers Rising Stars List, by Thompson-Reuters, the last 3 years in a row – 2020, 2021 & 2022 – a distinction which he is particularly proud of, as the award is peer-based, and nominated & voted-on by other practicing attorneys.

As a staunch advocate for social justice and protecting the rights of those who need it most, Mr. Bruner zealously represents every single client with the same intensity & passion, and fights to ensure each one of his clients get ALL the benefits they are entitled to under the law, no matter whether an injury is major, or minor – because he understands the significant impact any sort of injury can have on the lives of injured workers and their families.

Mr. Bruner has extensive workers’ compensation litigation experience and has obtained countless six & seven figure settlements, and awards at trial, including numerous 100% Permanent & Total Disability Awards, almost all of which were successfully upheld through appellate challenges, all the way up to the Supreme Court of California.

Mr. Bruner represents injured workers from all occupations, and walks of life, including, but not limited to: union employees, government employees, city council members, police officers, prison guards, security guards, teachers, airline employees, retail clerks, cashiers, nurses, medical assistants, truckers, drivers, energy sector employers, laborers, construction workers, chefs, cooks, waiters & waitresses, bartenders, service station attendants, warehouse workers, and more – and even represents adjusters and attorneys working for the insurance companies he litigates against on a daily basis!  And due to his extensive litigation experience, considerable knowledge of medicine & proficiency in medical issues, and intricate knowledge of the workers’ compensation law, can achieve maximum results for any kind of employee who is injured on the job in California.

Mr. Bruner also works to stay educated & current on the state of the law, and the ever-changing legal landscape in California Workers’ Compensation, by regularly attending & participating in continuing legal education programs and staying current issues & recent changes in the law.

Similarly, Mr. Bruner is a member of the California Applicant Attorneys Association (CAAA), and previously served on CAAA’s award-winning Regulations Committee, advocating for the rights of injured workers before the state legislature in Sacramento.

Mr. Bruner received his Juris Doctor from Seattle University School of Law, in Seattle, WA, and is admitted to practice law in California.   Prior to law school, Mr. Bruner received his B.A. in Sociology from the University of Washington, in Seattle, WA, with minors in Political Science & Spanish, after receiving his A.A. in Sociology & Pre-Law from Santa Monica College, in Santa Monica, CA.